History of the Popponesset Beach Area 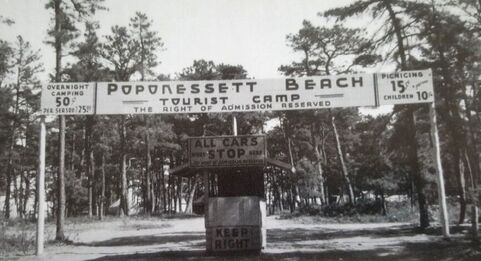 The first written record of a "lodging place" in South Mashpee appears in the 1793 census: Cesear Cobb, born a slave about 1740:
​" ... he bought his freedom from Captain Cobb of Vineyard, married one of our women who made him a good wife, is become rich. Have no children, but adopted one or two minors ... has a good house and barn and lodges a good bed and can treat any company handsomely..." After he and his wife died, the land on the eastern bank of Ockway Bay reverted back to Mashpee.

When Mashpee was incorporated as a town, on May 28, 1870, the restriction that the proprietors' lands could be conveyed only to another proprietor was removed, and hundreds of acres were sold to both residents and non-residents. Most of South Mashpee was purchased by speculators and cranberry growers and by 1900, contained only a handful of residents, as well as a few modest hunting and fishing camps.

Horatio Amos and his wife Ella married July 5, 1881, and were one of the Wampanoag families owning much acreage in South Mashpee in the late 1800s. Their mansard roof homestead remains opposite the entrance to New Seabury...
Click for More...
In 1878, when Mattias Amos sold the 39 acres of land on Popponesset for $29, he noted that a gale of wind with severe high tides created "an island" off the eastern portion of the land. Beginning in 1929, Malcolm G. Chace, and industrialist from Rhode Island, and fellow associates of Nantucket Sound Associates, bought the land of the Greater Cotuit Shore Company as well as acreage from cranberry growers and local residents. The new commercial operations, namely Popponesset Corporation, and still later the New Seabury Corporation, were formed to carry out the development of Mashpee's shores.

From 1934 until 1939, Norma Armstrong, a nurse, leased the Popponesset shores and operated a tourist camp and small store. Each summer, the area filled with tents and trailers on sites rented for 50 cents a night, or $25 for the season. Old-time vacationers of the 1930's remember the lines waiting to play the One-arm Bandit for 5 cents in the Armstrong store, as well as the wood-planked roller-skating rink north of the store, close to the present Popponesset Marketplace. In 1941, Popponesset Beach, Inc., built 50 small cottages for rent at $100 per season or $3 per day per person (children free) as well as 14 cottages for short-term rental, along with a cafeteria capable of serving 2,000 meals daily.
Several of Mrs. Armstrong's tent campers purchased very small plots of land on a strip of property from Roy Wilson, known today as Wilson's Grove.

Lager, formal houses were built on Daniels Island in 1937 which were advertised from $3,100 to $6,000. By 1941, 16 beach cottages and 31 season houses, a bathhouse and restaurant (today's Popponesset Inn) with tennis courts and an outdoor dining pavilion were built. A hurricane a few years later destroyed the Inn and scattered remains blew into Deans Pond.

A firing range, built in 1942, by Camp Edward Engineer Amphibious Command was turned over to the Army Anti-Aircraft Artillery Training Center, which brought hundreds of soldiers to Popponesset. A few of the housing units, converted into summer homes, remain in the area.

In the 50's, the Moffitt family operated a bed and breakfast guest house at 85 Red Brook Road, and across the street, summer visitors enjoyed the Indian Village, including powwows and crafts, at the home of Princess Evening Star (Gertrude Haynes Aitken).

Sons of Malcolm Chace are credited with the creation of New Seabury, which opened the first of 11 planned villages in 1962, on nearly 2700 acres of unspoiled waterfront and forested lands, followed by a clubhouse and two golf courses in 1964.

If you want to know more about the history of the area, visit the Mashpee Archives, across from Town Hall on Great Neck Road North. It is open on Monday and Thursdays, from 10:00am until 2:00pm. 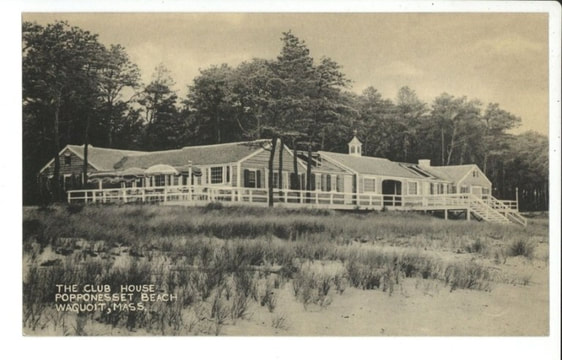